When I was a young boy back in the late 1940s, my Dad, Harry L. Hall, would take me with him to downtown Kansas City to visit the Musselman & Hall office. The office was in the old Railway Exchange building on 7th St, between Grand and Walnut. Unfortunately, the building has been razed and replaced by an ugly asphalt parking lot.

The Railway Exchange Building was a beautiful seven story red brick building with a Grand staircase going up the center of the building from the main lobby. I do not remember there being an elevator. There certainly was no air conditioning. Ventilation was provided by a bank of massive windows with no screens.

Dad and I would trek up that grand staircase to our office on the third floor. It was all I could do to make the climb.

The M&H office included a high ceiling in the main greeting area and a few private offices. I do not remember how many. The office smelled of dust, a combination of cigarette and cigar smoke and the odor of commerce. It was a busy place.

I would park myself at one of the desks and play with a typewriter or one of the primitive old adding machines while Dad did his business. 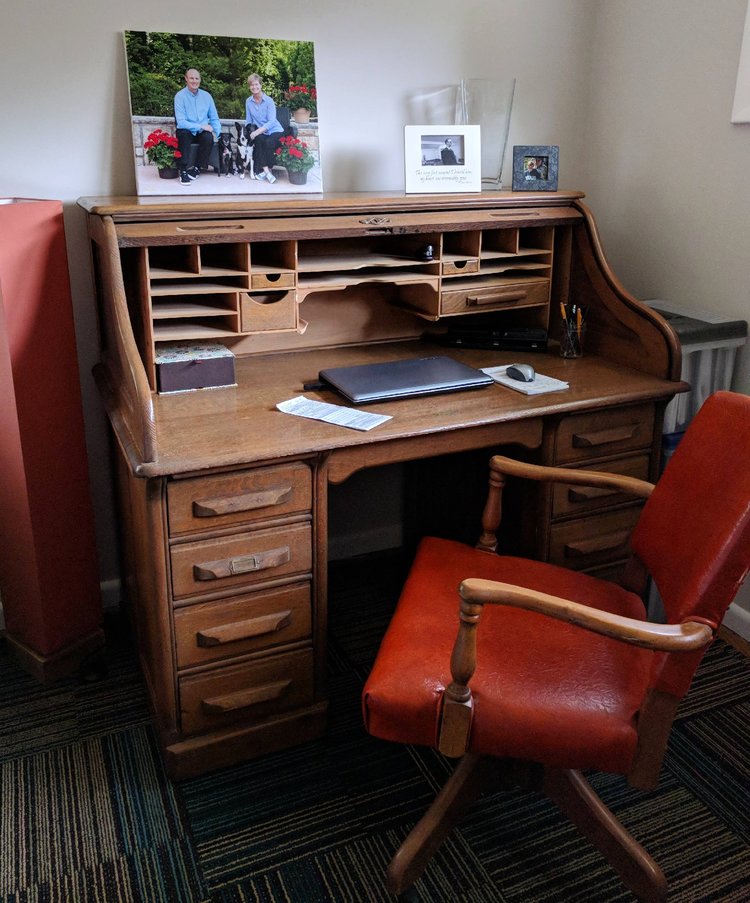 A prominent feature of the office was a grand old roll top desk manufactured by Robert Keith Furniture Company. Robert Keith was a well known and highly respected furniture manufacturer working out of their building at 13th and Baltimore. We estimate the desk to have been built in the 1920s.

M&H moved their office to 4922 E. Blue Banks around 1950 and all of the old furniture moved with them. Most, but not all of the furniture was placed into immediate use in the new location. Sadly, the old roll top desk was put into storage in the back of the warehouse in an open and dirty space with no climate control.

It was not until the early 1970s that I found the desk and took it home for restoration. I gave the desk to one of our employees, Carl Morris (Father of our own Mike Morris) who promised to do his best to bring it back to life. Soon, Carl returned the masterpiece to me with all the pieces in place and the wood restored as best he could do.We have kept it in our home through six moves ever since. Occasionally we have had it treated with wood preservatives and had the canvas on the roll top replaced. Every treatment made it better and more attractive.

This year, as Judy and I down sized, we found we had no room for Mr. Musselman’s desk. Happily, our youngest daughter Ashley (Smith) and her husband Brad wanted to keep the jewel in the family and agreed to move it into their new home in south Kansas City. Brad is a bit of a handy man himself so, once more, he cleaned it up, replaced the missing hardware, and set the desk in a prominent place in their home office. There she sits, Mr. Musselman’s desk, looking better than ever and ready to continue a legacy that now approaches one hundred years.