Sands in the Pacific are Nowhere Near the Beach

U.S. Silica is one of the nation’s leading suppliers of industrial sand. Their plant near Pacific, Missouri produces sand for the flat glass, glass container, chemical, foundry, petroleum and gas industries. Mining operations have been conducted in Pacific since the early 1900s.

Earlier this year U.S. Silica contracted with Eau Claire, WI based Market & Johnson Contractors to build an entirely new processing facility right next to the one they were already operating at peak efficiency.

The new addition is designed to increase production of fracking sand used in the oil and gas industries. The complex consists of a wash plant, dry plant, two 500 ton silos, one 250 ton silo, and a rail and truck loadout. The plant will be capable of washing and drying 150 tons per hour of fracking sand to load into trucks and rail cars to ship all over the United States.
Market & Johnson signed a $ 1.5 million dollar contract with Musselman & Hall to build the concrete pile caps and mechanical foundations.

M&H general superintendent Kevin Ross had this to say about the project, “You talk about a tight job site. U.S. Silica is hemmed in between the railroad tracks, old US 66 and a high bluff that contains the silica ledge. The existing plant had to stay in production while the construction took place. We had virtually no space for lay down of equipment and materials. We had to do our work in the tightest spot you can imagine.”

Work began in May with veteran superintendent Bob Heggemann in charge of the M&H concrete crew. Bob and his crew moved toward a late September completion time with the installation of 3000 cubic yards of concrete and 315 tons of reinforcing steel.

The project moved along so quickly that the design was being developed as the job was being built. The owner supplied most of the equipment. The anchor bolts had to be designed by the engineer of record in time for M&H to install them. Consequently, this left little time for the fabrication of the bolts. M&H division manager Keith Ahal had this to say, “We frequently had just a few days from the time we received a drawing until we were ready to pour concrete, so we used our own connections to get anchor bolts made with almost no lead time. Sometimes we actually had to deliver anchor bolts to the job and set them while the ready mix truck was unloading concrete.” 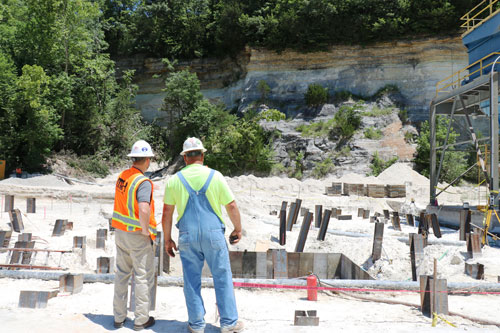 Anchor bolts were not the only thing supplied by M&H. As the construction hummed along, Kevin attended weekly progress meetings and helped Market & Johnson fill the need for tree removal, a masonry contractor, a roofing contractor and even a pavement striper.

In addition to the pile cap concrete and screening plant foundations, M&H also constructed a new main entrance to the plant, sequencing the work to allow for minimal interference with traffic in and out of the main gate.

Market & Johnson Project Manager Patrick Sullivan had this to say about Musselman & Hall, “Musselman & Hall was hired on as the concrete contractor and it was one of the best decisions that Market & Johnson has made. Bob (Heggemann)and his crew, Keith, and Kevin have been one of our biggest assets throughout this project and have provided us with top quality work. M&H has been able to help us out however we need, and not just been here to pour concrete. The attitude has always been “what do you need and how can we help.” With M&H’s commitment to project schedule, quality of work, and willingness to help the team, we would not hesitate to partner with them again.”