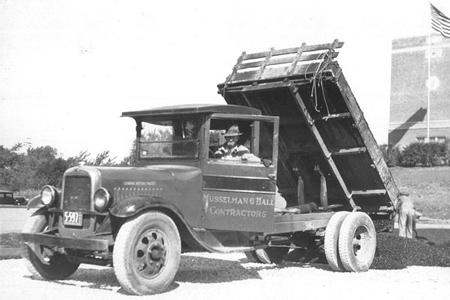 A prominent Kansas City construction company, George K. Musselman Construction Co. changed its name to Musselman & Hall Contractors as a result of the creation of a partnership between George K. Musselman (58) and John Nicholas Hall, Jr. (33). Musselman founded the company in the early 1890’s after graduating from Franklin and Marshall College in 1883. He moved to Kansas City from Lancaster County, Pennsylvania, in 1887 to take a civil engineering job at the Metropolitan Street Railway Co. He started his construction company a few years later first to construct railroad lines, including several interurban railroad lines, and then providing stone laying services and later branching off into street work. Musselman Co. did all the stone work on the old Kansas City Convention Hall building in 1900. The building was constructed in 90 days for the Republican National Convention. The old Convention Hall burned to the ground a few months earlier.

John Nicholas Hall, a native of Sedalia, Missouri was a stone mason. His father, John Nicholas Halthausen, also a stone mason, immigrated from Germany in 1856. John Hall joined the company in the early 1900’s after moving to Kansas City. He took care of the company’s stable of working horses. Before the merger in 1914, he was in charge of all the field operations. The company operated out of its office at 1107 McGee, Kansas City. The telephone number was 5663 and the stables were located at 48th and Charlotte St. 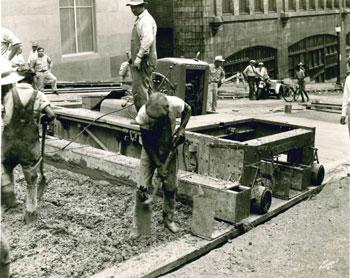 M&H thrived during the World War II years working at various defense installations including the Pratt and Whitney plant in Kansas City, Kansas and the Lake City Army Ammunitions plant east of Independence, Missouri. As World War II ended the company helped deal with the return of millions of veterans and continued branching out into street work and into all kinds of industrial and governmental concrete, asphalt, and railroad work. Years later, in 1945 George Musselman walked himself into the old St. Joseph hospital in Kansas City, Missouri where he died of “Dementia”. In the early 1950’s Edward H. Hall, Harry L. Hall, and Harry Sr. moved the main working office from McGee St. to the current Blue Banks Ave. location. In 1957 Doug Hall (current Board Chairman) began working at Musselman and Hall as a yard boy. In 1965 he graduated from the University of Kansas and joined the firm full time after working there during his summer vacations since 1957. In 1966, Harry F. Hall retiresd from the company at age 78 and sold his ownership to Harry L. and Edward H. Hall. In 1969 Harry F. Hall passes on. 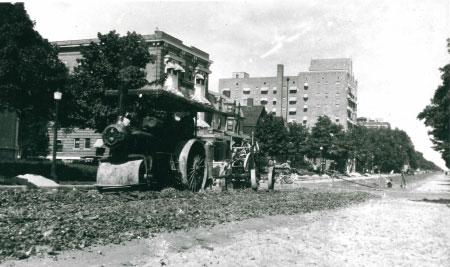 Doug Hall rejoined the company in 1971 after serving four years in the United States Air Force during the Vietnam conflict. Doug’s father, Harry L. Hall dies in 1978 leaving the firm to his son, and his widow Florence Hall. Florence works at the company office until 1986 when she also passes away. This moment marks the first time in 72 years that the company is left in the hands of only one owner, Doug Hall. Doug solely owned and managed the company with his wife Judy, his high school sweetheart, an accounting graduate from Washburn University. In 1994 when he began passing shares of his ownership on to two long time employees Mike Morris and George (Howie) Snyder Jr. Both men were second generation employees and began working at Musselman & Hall at age 15.

Dexter Phillips joined the company in the summer of 1996, while he was attending the University of Kansas. In 1997, after receiving his bachelor’s degree in business, Dexter joined the company full time. He began acquiring ownership in 2008 and Howie Snyder sells off his shares leaving the company in 2010. For a decade, the company continued to grow and thrive under the ownership of all three men; Hall, Morris, and Phillips. In 2011 M&H expanded its locations and established an office in St. Louis, Missouri. 2014 marked the big celebration of Musselman and Hall Contractor’s 100th year anniversary. In 2017 growth continues and a third office location is established in Wichita, KS. 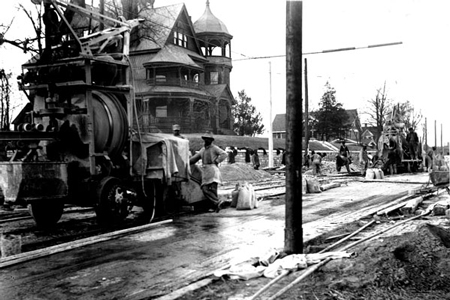 Musselman and Hall officially became an employee-owned company on July 1, 2018. It was the most drastic change in over 100 years. Although the Hall family no longer has direct ownership over the company, long-time and former CEO Doug Hall will continue to perform duties within the company in his executive role as Board Chairman over the ESOP. Dexter Phillips will manage M&H in his new role as Chief Executive Officer and Mike Morris will continue to manage as President.

As a prosperous and long-standing company, Musselman and Hall employs more than 275 employees during the busy construction season between all three growing locations in Kansas City, St. Louis and Wichita. M&H continues to offer services in the areas of railroad construction and maintenance, decorative concrete, concrete construction, and asphalt paving and maintenance.

We would love the opportunity to work with you!  Reach out to us for a free consultation.

View Our Construction and Maintenance Capabilities

Interested in learning more about our specialized construction services?